The goal of data science in health care is to build systems which make use of data to help patients and physicians make the best possible decisions about their health. One way that we have approached this challenge at Penn Medicine Predictive Healthcare is to employ machine learning to predict which patients are at elevated risk of adverse events (for example sepsis, readmissions) at any given moment. The resulting algorithms, built on a large collection of past cases, take in a variety of data points including a patient’s demographic information, vital signs, lab values, hospital utilization and diagnosis history. From these data points, the algorithm looks for patterns that suggest that the patient is at elevated risk. The result, however, is a risk score, not a decision. Being presented with such a score invariably leads to the following (non-exhaustive) types of questions:

In order to go from a machine learning model which generates a risk score to an actual decision about what to do with it, we need to think about the expected utility of our options. This post provides a gentle introduction to making decisions in situations of uncertainty using the concept of expected utility, then demonstrates how to apply the same thinking to risk models in predictive healthcare applications.

Expected utility can be thought of as the mathematical formulation of how much benefit (eg utility) you can expect to get when the outcome of an event is uncertain. It requires two components:

What is the trick-or-treater’s expected utility of picking candy at random from this bowl?

With this in hand, we can ask a variety of interesting questions, for example:

Which is more than the expected utility from the first bowl. Given the option to draw random candies from bowl A or bowl B, our trick-or-treater would be better off by choosing bowl B, since it has the higher expected utility.

I leave it to the reader to solve this one, but we can see that using the logic of expected utility, we can compare an array of alternative scenarios, each of which consists of uncertain outcomes.

Great! We’ve made it this far. Let’s have some candy before continuing. 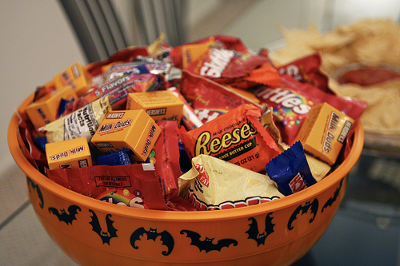 A risk model that predicts whether a given event will happen or not (eg sepsis/not-sepsis) generates probabilities associated with 4 possible outcomes:

This collection of outcomes is analogous to a bowl full of 4 different kinds of candies for which we derive different amounts of utility, where the mix is determined by the probabilities associated with each. We’ll look at an example of how we can plug in values for the utilities in a predictive healthcare application below. With this formulation, we can now apply our logic of expected utility to this situation by modeling the expected benefits/costs (eg utility/dis-utility) of each outcome and plugging them into the expected utility equation.

So, a predictive model is kind of like a bowl of candies. There is a collection of possible outcomes, each of which occurs with some quantified probability, and each outcome is associated with some level of utility.

For a given risk model and population, the probabilities associated with each of the four outcomes above is a function of the threshold \( t \) we set to discriminate between predicted positives and predicted negatives. We can vary the threshold to generate a suite of alternatives. These alternatives are analogous to various bowls of candy, each with different compositions of candy types. We then choose from this suite of alternatives by selecting the one which maximizes the expected utility:

Estimating utility of each of the four possible outcomes

The utility associated with each of the four possible outcomes of a risk model is dependent on the case at hand \( \ddagger \). Unlike candy, for which we have subjective preferences, the utility of each of the different outcomes in a predictive healthcare application will have associated utilities that can be modeled by breaking them each down into their component parts.

Let’s look at one example of modeling the utilities of the outcomes. In this example, we have a risk model for some bad event that we would like to predict so that we can deploy an intervention to avoid or mitigate the cost associated with it. A positive prediction triggers the intervention. The intervention has some efficacy on true positive cases and some cost associated with false positives. Note that here we’re switching from talking about utility to talking about cost, however, we can think of cost simply as negative utility.

Ideally, we would like for every intervention to avert the bad event from happening, but unfortunately, that is unlikely to be the case. Instead, we introduce a term for the efficacy of the intervention \( E \). Our model of utility then becomes:

To get the expected utility, we multiply by the probability of each outcome:

and sum the result.

With this in hand, we can begin to ask interesting questions about the tradeoffs between the various components of the system. We can also stress test our expectations against wide ranges of values over those quantities about which we are uncertain. For example

It should be noted that the above model of costs is just one possible model, and undoubtedly makes simplifying assumptions. There is nothing stopping us, however, from repeating the exercise using different assumptions or adding additional complexity/realism. Questions of the sort “what if the false positives lead to additional harm?” are easily incorporated. Further, once incorporated, the question becomes a more precise one, namely: “at what level of additional harm due to false positives would we be better off not using the risk model to deploy interventions, instead choosing some alternate strategy?” These questions become answerable in the most coherent and rigorous way possible when using the framework of expected utility maximization.

That is not to say that these answers are infallible – they are still conditional on the assumptions that we’ve made and on the uncertainties associated with the component parts. Rather, they are the best possible answers to the most precisely formulated questions, when starting from a given set of assumptions. The success of data science applications in healthcare depends on our engagement in a process of continuous and close collaboration between data scientists, clinicians, and patients. By working together to transparently lay out goals and assumptions, we can evaluate the best alternative under those assumptions. As additional information becomes available, assumptions can be refined and re-evaluated.

\( \ddagger \) An interesting feature of the exercise, however, is that the solution of the optimal threshold is invariant to the scale of \( U \). That is, we don’t strictly need to come up with an absolute estimate of utility, but rather need only to define the relative utilities associated with each outcome.